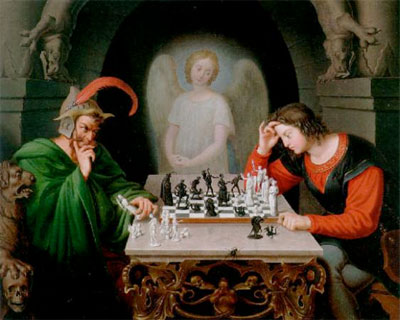 This story was shared recently during a City Harvest Church service on 23rd February 2013, but I intrigued, I went to do more research on it. Apparently it’s been told by Christian speakers and pastors as early as 1955 when Billy Graham told a variation of it earlier in his ministry.

Here’s how the story goes:Two men are standing in front of a painting called “CheckMate” in an art gallery. In the painting, a , a king and his advisor-magician is playing chess. The magician is supposed to be the devil. The devil is smiling and grinning from ear-to-ear because he has the other man, the king, cornered.

The first man went on to look at other paintings in the gallery, but the second man was intrigued by the title and the chess game drawn. You see, he’s an international chess champion, so he stayed and stared and studied the chess board on the picture. There was something wrong, and he kept trying to look for the answer.

He took so long that the first man had already seen the entire gallery and came back to the “CheckMate” picture, and saw the second man still there, smiling. When he saw him walking over, he beckon him over excitedly and shares with the first man…

“The perception is not right! The king has one more move!”

The chess champion said again – “it’s not checkmate. The king has one more move.”

As I look at the picture, it doesn’t seem to me that the devil was smiling, nor did the king look like he was overwhelmed. The devil, in green on the left, looked unsure and afraid that the king wouldn’t buy his bluff, and seemed to show that he was planning more stuff. The king, on the other hand, looked entirely at the board only and totally focused on the board.

You know, when you look at scripture, you will see that throughout history of earth and our time, the devil had never stopped to try to scheme to place God and His people into “CheckMate” like situations.

Read Also  SHEDDING THINGS, RELATIONSHIPS AND STUFF THAT ARE NOT IMPORTANT

In Exodus 14, the Egyptians were relentlessly chasing the Israelites to kill them, and had chased them to the Red Sea. The Israelites were stuck between the Red Sea and a horde of Egyptians that was closing in on them. They could hear the chariots, the war cries, the dust that was being kicked up. They have nowhere to go. Everyone will die, their possessions will be taken as war booty.

You know, the king had another move.

And what happened was as it was written – the rod was lifted, and the sea was divided and the Israelites walked through, unscathed. The Egyptians followed but the seas closed in on them, and all the Egyptians died. Every one of them. The king had one more move.

A frowned-upon boy, called David, deemed insignificant by his brothers and father; unable to fit into armor – this “boy” threw Goliath off balance and sliced off his head, delivering the tie and the Israelites. David knew about being in checkmate, and stood in his faith when he said that the Lord shall rescue him from the Philistine in 1 Samuel 17:37.

Daniel survived being thrown into the lion’s den for ignoring the law to pray to King Darius but he instead trusted in God and prayed to God. Daniel was locked in with lions that had not been fed, so that they will tear him apart.

But the King had another move – He sent an angel to close the lion’s mouth. When King Darius, who was fond of Daniel, found him safe, he declared that “I decree that everyone throughout my kingdom should tremble with fear before the God of Daniel. For he is the living God and he will endure forever. His kingdom will never be destroyed, and his rule will never end (Dan 7:26)”

How this applies to you

Maybe you feel that you’re stuck and have no where to go. You feel that you’re in a checkmate situation. You may be in debt as high as your eyeballs. You may have lost your job. Or that your business or marriage is in trouble. Maybe someone you love is dying. Or maybe you have an addiction that is eating you with shame.

No matter what your situation is, you have to remember that the king always has another move in your life. God has another move in your life. He’s not done with you. He did everything, the entire salvation plan was for you and I. He sent His Son to be sin and to die on the cross. Pray to Him. His love for you is holy and is unconditional, and He will never leave you nor forsake you.

Even if your pain keeps or limits you from finding the words to pray to Him, He’s prepared for the Holy Spirit to pray for you. In Romans 8:26: “And the Holy Spirit helps us in our weakness. For example, we don’t know what God wants us to pray for. But the Holy Spirit prays for us with groanings that cannot be expressed in words.