It’s true, this idea of financial independence, retire early can be such a big idea that we start to shut down cos we get overwhelmed right? Here’s how I do it.

I call it the eat-the-elephant-one-bite-a-time method.

The “normal” FIRE means that you have enough passive income from your passive income investments to cover all your living expenses, and it can take quite a chunk of money and time to get here; but for us who are just beginning, let me introduce you the idea of

Yeah, it was nice to find out that there’s different stages of financial independence retire early, which makes sense once you think about it. After all, no one “suddenly” becomes financially independent retire early right?

Lol, so true but I didnt think about it earlier?

So coastFIRE is basically an early stage milestone for financial independence retire early dudes (and dudettes). The goal at this point is so save very, very aggressively as early as possible so that you can invest aggressively such that the compound interest of your investment will carry you all the way towards retirement.

To break down coastFIRE is 3 steps:

Say an example of person A, let’s call him Jake. Jake is 24 this year, and he wants the usual:

Save like mad and find $279,590 and put into a stable investment that will provide 6% return on investment; and reinvest every year for 25 years. 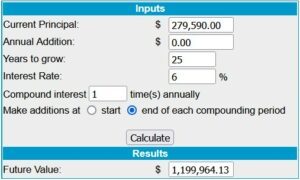 What I really really like about this approach is that it FRONTLOADS everything: once off $279,590 and let the interest keep compounding and growing by itself. Jake will save like mad and earn as much as he can, then frontload the entire $279,590 ONCE OFF and then just leave it be.

The amount will compound and keep compounding and after 25 years, Jake would 49, and he would have $1.2M in his account.

During this 25 years, he of course must work to sustain his day to day, but he can look forward for a pay day in 25 years time with confidence. This method frontloads a lot, but at the same time, offloads financial strain from the early stage.

Jake can keep adding to this amount in the meantime to either shave off years needed to hit the coastFIRE amount, or have more than enough at the end of the 25 years.

Risks or downsides to coastFIRE and how to manage

As you can see, coastFIRE is a very powerful long term stress reliever, but there are a few risk/weak points as I mention above. There are workarounds for these potential risks, as I write in orange.